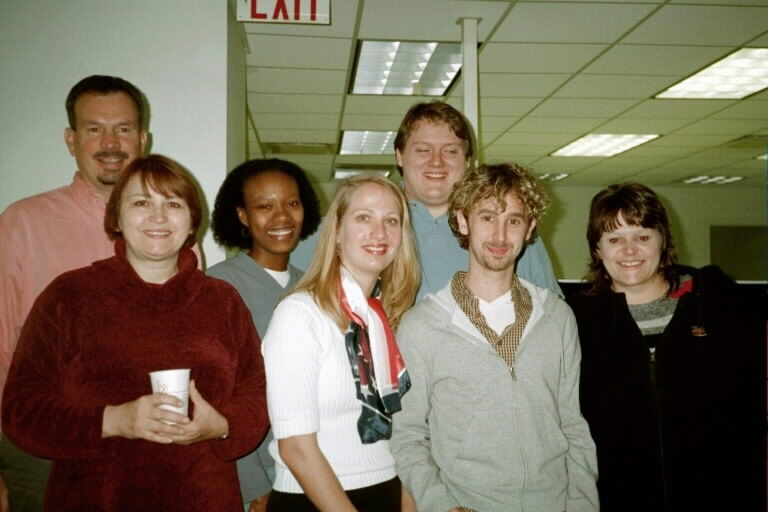 This was an email written on Sept 11, late in the evening to a friend who was worried about me. It’s been lightly edited for clarity.

What a harrowing day! I arrived at the office at 61 Broadway at about 8:45 a.m. My co-workers told me that a small pleasure plane had hit the World Trade Center. I sat back down on my desk to get on with business in preparation for my vacation abroad later that week. My co-workers went outside to take a look.

A few minutes later I felt the building shake. My insides felt like they were going to explode. I heard a blast. I naively thought it was the first plane exploding. It actually was the second plane hitting the World Trade Center.

I stuck my head out the window. I could see debris flying all over the place. People were running down the street. It reminded me of the bull races in Spain. I checked the internet for some news, but there was nothing. We were on a low floor so we could not get radio reception.

My co-workers returned from outside. I was informed that Human Resources wanted us to go to our corporate office which was not as close to the World Trade Center as our current location.

I went outside and people were standing in the streets. It was sunny and beautiful. Standing at Wall Street and Broadway, I could see the Word Trade Centers clearly. I could see the huge gaping holes in the towers, the smoke clouds billowing out. I saw other ghastly things too, but it took me months to recognize and understand what I saw.

At the corporate office at 33 Maiden Lane, everyone was sitting in the board room watching the news on our triple plasma screens. We were all horrified and in shock. People were sitting there with their mouths open. Some were crying. I tried to call my loved ones but the landline phone lines were jammed. My cell did not have a signal. I searched for an open computer to send email but was not successful.

The fire marshalls gathered us all in the stairwell. We waited for instructions for a very long time. It was hot and people were afraid. Then we felt a rumbling. The World Trade Center had collapsed!!! Of course, we didn’t know it until later.  The fire marshalls announced over the loudspeaker to evacuate the building. I thought “but where shall we go?” The subways were closed and there was pandemonium in the streets. We walked down the stairs only to get stopped in the stairwell again. People began to panic. Smoke filled the halls. Somehow, we managed to exit the building.

My co-workers took a head count, there were six of us. The guys decided we should walk to the Seaport to get as far away from the World Trade Center as possible. We went out a side door, one that we had never used. We couldn’t see anything in front of us (at all). The lack of orientation and familiarity of just exactly where we were was even more unsettling. We didn’t know which direction was East, North, South or West. We figured it out. We walked to the Seaport through a cloud of dust and smoke. The smell was oppressive and unnerving. We couldn’t see. We couldn’t breathe. The guys took off their shirts and gave them to the ladies so we had some fabric to cover our mouths.

My co-workers lived in Long Island, New Jersey, and Pennsylvania. They were stranded in NYC and some had left their wallets in the office on their desk. They did not have keys to their homes or any money. I said for the sake of everyone’s safety, let’s just get off this island (Manhattan) and worry about everything else later.

We saw people walking across the Brooklyn Bridge. We decided that even if the bridge seemed like a target and risky, it was safer than staying in the streets of lower Manhattan while the World Trade Centers collapse around us. We also did not know what else to expect and it seemed wise to get as far away from there as possible.

At the mouth of the bridge, the guys and the gals went their separate ways. They were looking for their girlfriends. The ladies continued on the bridge.

When we got to the mouth of the bridge, the second tower collapsed. We felt it rumbling. We were afraid. We didn’t know what it was and initially thought it was a bomb. But then we saw the dust cloud come toward us. It looked like a tidal wave coming at us. We ran as it enveloped us. Eventually, we got to Brooklyn.

The four of us hitch-hiked a ride to my house where we were able to calm down, contact loved ones, (when the phone lines were working) and regroup. My husband was also safe and sound and he served to help us all by buying food, and alcohol and basically help calm everyone’s nerves.

Everyone has finally found someone to take them home and so now, I am alone and I have time to reflect on this.